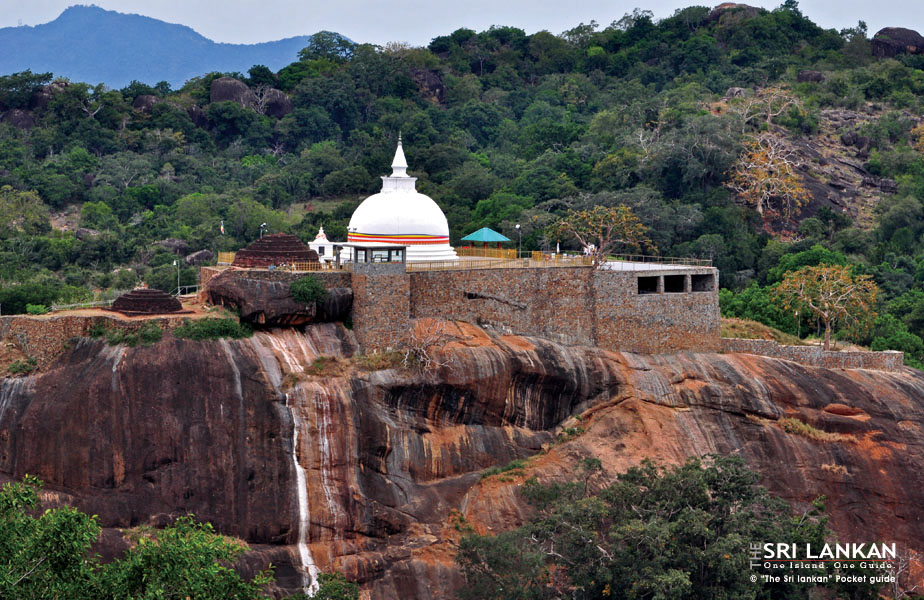 Some 20 kilometres from Kataragama along the Kataragama – Situlpawwa (Yodhakandiya) Road, visitors will arrive at the Situlpawwa ancient Buddhist Monastery, dating back some 2200 years.

The monastery is a fixture on the Kataragama Pilgrim Route and is also considered as a centre of Buddhist learning. The Situlpawwa monastery spans out amidst many acres of the Yala Reserve. The road cuts through the Yala National Park and therefore all types of animals may be encountered along the way but are mostly harmless.

The highlights are two giant rock tops (Kuda and Maha Situlpawwa) that feature stupas at their pinnacles. Some suggest that one of the milky white stupas was enshrined with the remains of a novice monk named Tissa that lent to the name Tissa Thera Chetiya.

Also to be seen is an image house (gal lena) built into a natural drip-ledge cave, that features a reclining Buddha alongside various stone slabs with inscriptions mentioning details about those about who donated the land or uplifted the temple.

The temple wall art and frescoes here are thought to date back to the Anuradhapura Period thus making them unique. Situlpawwa also plays host to an intricate cave complex where it is said that monks meditated.

Adjacent to the cave are ruins of a former preaching hall, bodhigara (Bo-tree shrine), relic house, bodhisattva (enlightened) images and other ruins.

The Kuttum Pokuna is a small pond that stands between the giant peaks. Pilgrims and visitors must cross the pond to reach the other side, before ascending the second peak.

The climb to Kuda Situlpawwa is one that cuts across a forest, with overgrown trees and extending roots spread out across the rocky staircase.

Along the way, visitors may see some caves used for meditation. The views from the rocks are impressive and showcase boulders of all sizes, as far as the eye can see.

Situlpawwa is believed to have been occupied by some 12,000 arahant (achieved the highest mind level in Buddhism) monks at one time. The location was established by King Kavantissa circa 2nd Century BC with Situlpawwa deriving its name from chiththala pabbatha or ‘hill of the quiet mind.’

The original layout included various preaching halls, alms halls, meditation huts and other facilities for the comfort of monks who endured hardships whilst meditating in this area. Following this, many kings and rulers have contributed to the rehabilitation and improvement of the monastery.

Monkeys, wild boar and friendly elephants, sometimes roam the car park, however please do not feed them!